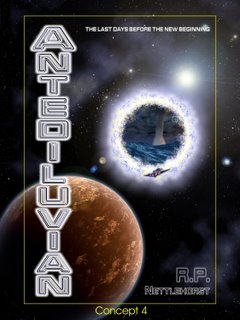 I received preliminary artwork from my publisher on Friday for the two books of mine that they are publishing. Antediluvian tells the story of Noah, but assumes a high tech, solar system spanning civilization involved in an interplanetary war that will destroy everything. I carefully followed the outline of the biblical story and nothing within the novel contradicts the biblical story. This illustrates just how little information we actually have in the Bible about Noah and what happened. The traditional Sunday School version is not the only possibility. Of course, my version is pure science fiction. 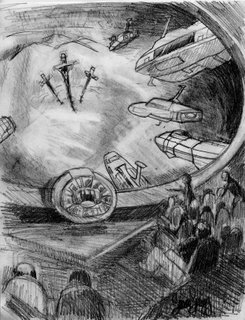 The other book that’s being published is Somewhen Obscurely, a time travel story about Aramond Smith O’Reily, who had a series of bad breaks in his life. He saw his mother raped and murdered and got sold into the past as a virtual slave, becoming a mohado, a time-slipped worker. Later, he manages to make something of himself and winds up transporting time-slipped workers himself, moving them from depressed time zones to more prosperous time periods in his own time machine. The preliminary cover to that book is still just a pencil sketch; the artist for that book is doing it in oil on canvas.